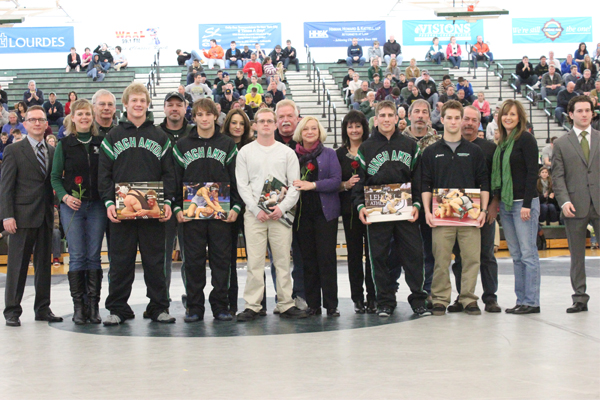 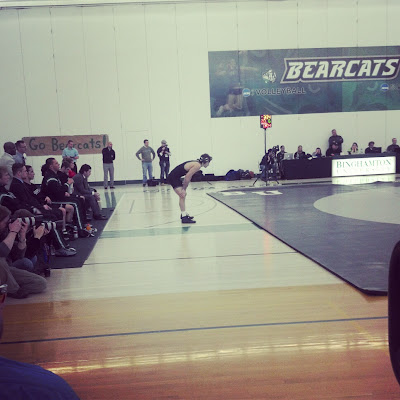 Sunday marked the last home appearance for five seniors during the dual meet against Hofstra University.

Senior Day brought in a full crowd to the West Gym as we watched seniors Patrick Hunter, Donnie Vinson, Nate Schiedel, Dan Riggi, and Derek Steeley walk up with their families and coaches to get recognized.

The Bearcats started off slowly, dropping their first three bouts.  Senior and captain Donnie Vinson was the first win of the afternoon, with a first-period pin against Sophomore Cody Ruggirello.  Watch the video below to see Donnie's pin, it's a must-see. 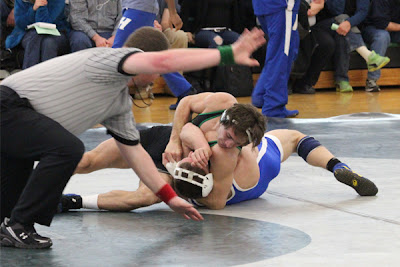 Following Reed, Senior and captain Nate Schiedel cradled up junior Tim Murphy and had him pinned within a minute and fifteen seconds.  Schiedel's pin is included in the video below as well.

Ending the dual, heavyweight Tyler Deuel had a 12-8 major decision, leaving the final score of the match 19-23, coming short just by a few team points.

Donnie Vinson and Nate Schiedel remain undefeated in dual meets (both 17-0).  The Bearcats will have their final dual meet of the season next Thursday against Bloomsburg.  After this, our wrestlers will be preparing for the CAA Championship in Boston on March 9.

Watch this video to see our senior recognition and a brief overview of our performance against Hofstra:

Post by Marissa Sarfati (msarfat1@binghamton.edu)
Posted by Unknown No comments:

This will be the final match at home for 5 seniors, Patrick Hunter, Derek Steeley, Dan Riggi, Donnie Vinson and Nate Schiedel.

Post by Marissa Sarfati (msarfat1@binghamton.edu)
Posted by Unknown No comments: